Can’t We Talk About Something More Pleasant?

Five years after her mother’s death at the age of 97, Roz Chast commemorated her journey with her parents during their last few years in a graphic memoir titled “Can’t We Talk about Something Pleasant?” Her mother was a strong, fiercely independent, and often authoritative woman, “built like a peasant” as she liked to boast. Her father was a sensitive man who was madly in love with his wife and glad to have her be the captain of their life together.

Chast recalled grappling with layered feelings about her childhood and her relationships with her parents, guilt over her own impatience and transfer of the “dirty work” to aides, and frustration at her inability to convince her parents to take action. She constantly worried about their well-being, living by themselves in a Brooklyn apartment and then in an assisted living facility, and how their savings would cover the astronomical expenses for personal and medical care. Chast’s memoir showed the uncertainty of the near end-of-life journey from the perspective of an adult child, in a reversal of roles with her parents.

The book opened with Chast’s attempt at initiating the “conversation.” She vaguely began with “so…do you guys ever think about things?” When her parents feigned cluelessness to her reference, she got annoyed and gave up. Afterwards, she was actually relieved to be able to put off the conversation. Chast’s honesty about her relief at holding off the conversation is refreshing and, I think, relatable for many families. It’s something that should be done, but aging and dying are so very unpleasant and awkward for families to discuss specifically and directly.

Her parents’ reluctance to talk about dying or being too old to take care of themselves is understandable. They grew up in immigrant households and lived through World War II. Their generation’s survival strategy was to “not tempt fate” by speaking about potential horrors. And unsurprisingly, since they had been taking care of themselves for over seven decades, they were reluctant to give up decision making power and allow anyone else to take care of them.

One of the smartest things Chast accomplished was getting her parents to work out their affairs while they were mentally cognizant. They initially hesitated to to share and hand over their financial matters. Chast brought in a professional, third party – an elder lawyer who met with them at their homes and help them put together a will, health care proxy, and power of attorney. She joked that unlike someone else’s child in a story her parents like to tell, she did not go out and buy herself a closet of cashmere sweaters with their money afterwards.

The Beginning of the End

While Chast was busy with her career and starting her own family, she didn’t worry about her parents very much. They had health ailments and were on a gradual decline, but were living independently. However, when her parents turned 90, Chast began to notice that their home was not as clean as it used to be and they seemed frailer. They were moving into “extreme old age.”

The major event that propelled Chast into full-on caretaker mode was her mother’s fall from a ladder. Falls are a serious and costly problem for older adults. According to the CDC, each year, one out of three people over 65 experience a fall, but fewer than half tell their doctor. Like many of those older adults, her mother refused to go to the hospital. After weeks of worsening pain, she reluctantly went to the emergency room. During her father’s stay at her home, Chast learned the extent to which his dementia has been concealed under her mother’s care.

Guilt is a common feeling for many family caregivers. Chast aptly highlighted the cycles of frustration at herself, at her parents, and at the circumstances and guilt. She felt bad for not having more patience for her father’s “sundowning.” Over the course of the day, he became more frantic and paranoid about someone stealing his expired bank books. She felt torn about leaving her parents’ home after her mom’s major fall. On her way home, she wondered if she should have spent the night. But her children were waiting for her, she reasoned. If only her father stepped up, things would be easier. Or if her mother would just stop being stubborn and go to the hospital. She felt like the worst daughter in the world. 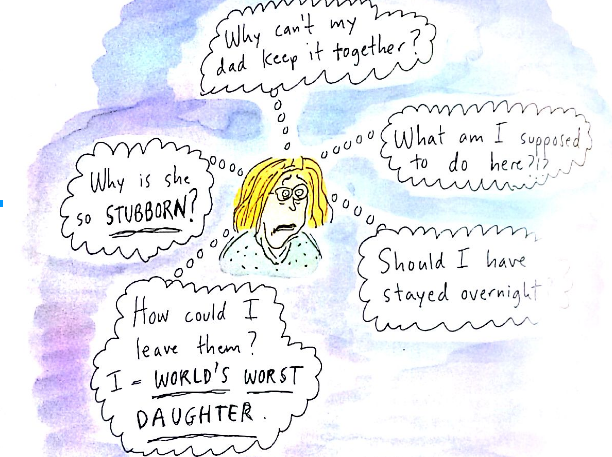 (Excerpt from ”Can’t We Talk About Something More Pleasant,” pg. 58)

Although her parents had been frugal and saved for retirement, there was no way to budget for how much care they would need and really how long they would live. Since Chast was in charge of paying the bills for a growing tab of services, she was always worried about how much longer her parents’ savings would cover the $7,400 a month apartment at the assisted living facility, personal care, etc. She hilariously illustrated telling her mother, with support from the hospice staff, that she was “running out of money.”

Juggling many responsibilities, it is hard for caregivers to research and educate themselves on all matters, from the best medical facilities to the best home care agencies to the best health coverage options. When Chast’s parents moved to an assisted living facility near her home in Connecticut, their retiree health insurance plan based in New York did not carry over. They paid out-of-pocket for medical care except for hospital stays which were covered by Medicare Part A (hospital insurance). Typically when someone has both Medicare and retiree health insurance, Medicare pays first, with the retiree insurance covering the rest. I can’t help but wonder if enrolling into Medicare Part B (medical insurance) might have saved her parents a portion of costs for non-hospital medical services.

For a long while, Chast expected the end after bouts of sickness, but her mother inexplicably turned around each time. Then her mother entered what Chast described as “chrysalis,” the final passive stage when life has been “unduly prolonged.” Her mother slept most of the time, waking up only to drink Ensure. Like a pupa, she did not interact with her environment.

No one knew how long her mother would be in chrysalis. This stage of limbo is often agonizing for families. Chast’s description reminded me of my last visits with my grandmother, during which I’d give monologues while she was comatose. She was like a cardboard cutout of the grandmother I used to know.

During the period near and after her death, Chast hoped desperately for reconciliation and acknowledgement of past hurt from her childhood. She described a heartbreaking visit, when she tried to talk about the distance she felt in their relationship, but disappointingly discovered that the time to mend their relationship had passed. It seemed like the best time for this talk would have been, like the meeting with the elder lawyer to sort out financial and legal matters, before the rapid health decline.

Chast’s intent for the memoir was to share her personal caregiver journey. I’d like to know her if her experience with her parents has changed her plans for her golden years. Was there anything she would have done differently? How will she prepare her children for her aging journey?

Chast honored the journey that she and her parents took together, with humor and candor. Highlights from past conversations, photographs and her mother’s poetry were sprinkled unobtrusively throughout the book. We got glimpses of her parents’ younger selves, unclouded by amplification of their idiosyncrasies in old age. I know that my caregiver journey with my own strong-willed, immigrant parents might follow a similar arc as Chast’s. Her memoir reminds me that my caregiver experience is simultaneously unique and universal.

Written by Isabella Leung
Isabella is an “emerging” caregiver for her immigrant parents. She is passionate about bringing concepts to practice and improving the US healthcare system for older adults, family caregivers, and vulnerable populations. She has studied human-centered design as a creative problem solving approach for sector-specific and cross-section solutions. One of her most rewarding professional endeavors has been helping to build the online health insurance marketplace for District of Columbia residents and small business employees. Currently, she provides consulting services to health systems, nonprofit organizations, and governments. When not contemplating the intersections of healthcare systems, health aging, and the patient experience, Isabella likes to hike, camp, practice yoga, and explore caves.

Gabe Winant is the author of The Next Shift: The Fall of Industry and the Rise of Health Care in Rust Belt America. The book "traces the...

The Upside of Stress: Why Stress Is Good for You, and How to Get Good at

I picked up Kelly McGonigal's The Upside of Stress assuming I would skim it for a few interesting ideas, but probably not finish it. This was based...

I'd just finished Muriel Gillick's Old and Sick in America, an eye-opening 'narrative tour' of the US eldercare system and its recent history, when...