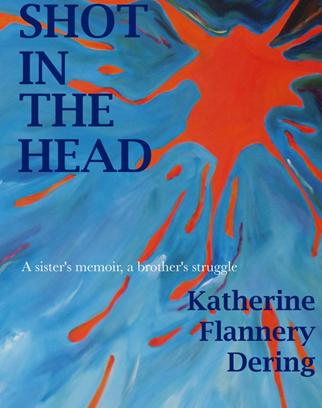 by Katherine Flannery Dering, author of Shot in the Head, a Sister’s Memoir, a Brother’s Struggle

When I started working on my memoir about taking care of my brother Paul, who suffered from schizophrenia and then lung cancer, I didn’t know how people outside the family would take it.  Paul’s illness was treatment resistant, and from the time of his first psychotic break he never really made much sense. “Recovery” was a word reserved for other, luckier people.   He could string together a couple of sentences about the meal he was eating or the weather, but inevitably by the third sentence he was talking about how he’d broken his leg a few days ago,(totally imagined) or that someone across the room was staring at him and was trying to steal his thoughts, or about the movies he had made, back when he used to be Clint Eastwood, or that white people were killing all the Indians.  In my book I tried to let readers see him for better or worse.  He was not an easy man to love.

And not an easy man to try to look after.  We in America expect to be able to fix things.  When we take a pill we expect the headache to go away.  If the knee or hip doesn’t work, we get a new one.  Medicine and nursing are all about curing things. Cut it out. Zap it with antibiotics.   But no matter what doctors and psychologists did for Paul, nothing was curing him.  In his hospitals, apartment or group homes, his life appeared out of control and aimless.  Trying to help him at all felt so futile.

Yet as I helped to nurse him through his last illness, we were able to share moments of lucidity.  Every once in a while he’d ask about my daughters, or he’d recall some shared moment back home when our parents were alive.  He obviously enjoyed it when I took him for a burger and fries at the diner. (I suspect the food in his group homes was not very tasty.)  One day after a session of radiation, I put the top down on my convertible and we let the sun shine down on his scraggly chemo head.  As he bopped his shoulders to the Stevie Wonder CD playing on the radio and sipped his soda, I watched him for a few minutes, thinking about what a raw deal he had gotten in this life. I wondered what kind of crazy ideas were floating through his head.  And then he turned to me, grinned and said, “Now this is the life!”  My heart almost stopped.  I knew I had to share our story with others.

At an exercise class at my gym today, I saw a woman in the class approach me with her arms outstretched to give me a hug, and before she said a word I knew she must have just finished reading my book.  I see Linda a couple of times a week at classes, but we are not friends beyond that. Yet she hugged me and kept her arm over my back for several minutes as she told me how much she had enjoyed reading Shot in the Head, and how much the story meant to her.

This is not an unusual response.  Another woman, this one in a civic organization I belong to, met me a month ago with a “Kathy!  You came!” echoing the phrase repeated in the book.  “By the time I got to the last couple of times Paul said that, I was a puddle,” she said, tearing up with remembered emotion. A couple of other friends have also come up to me to hug me and say some sort of comforting words.  “So sad.  You did your best.  I had no idea.”

My book has started a new conversation between my gym friend Linda and I.  It turns out that she had a friend who developed a serious mental illness in high school, some thirty years before, just like my brother Paul did.  “He just sort of disappeared,” she said.  She and a couple other old high school friends found out a few years ago that he was still alive, and they began visiting him and taking him out for lunch every six weeks or so.  They’ve been doing it ever since.  “And we enjoy it as much as he does,” she said.

And sometimes, that’s all we as caretakers and friends can do.  Give our loved one that great afternoon, when they can say “This is the life!”  We may wish it was more, we may wish we had a magic pill, but this was the only life Paul had, and Linda’s friend has, and we can be happy that we are able to help them find moments to enjoy.

Written by Katherine Flannery Dering
Katherine Flannery Dering was the second of ten children. Her brother, Paul, was the eighth of the clan. Paul developed schizophrenia at age 16. Following the death of their parents, Katherine and her siblings became involved in trying to help their brother, and the care intensified when he developed lung cancer, as well. The title of her memoir comes from Paul's delusion and frequent assertion that he wasn't mentally ill; he'd been scalped, or he'd been shot in the head. The book, Shot in the Head, shares the experience of her large family's efforts to make his life better. Katherine also shares her experience in an internet radio interview at http://www.voiceamerica.com/episode/81293/schizophrenia-false-memories-family-memoirs-and-family-caregiving

What is compassion fatigue? Caregivers explain.

"Suffering from compassion fatigue does not mean you’re bad at helping or caring, it only means the scale between caring for others and caring for...

As she nursed her mom through cancer and dementia, a tense relationship began to heal

In March 2020, Lori traveled to Florida to help Audrey move into an assisted living facility, a plan that was immediately upended with the arrival...

Weighing Risks of a Major Surgery: 7 Questions Older Americans Should Ask Their Surgeon

Older adults contemplating major surgery often aren’t sure whether to proceed. In many cases, surgery can be lifesaving or improve a senior’s...