June 29, 2005. A day I will never forget. Our 17 year old son Zachary was diagnosed with a DIPG, an inoperable, malignant brain tumor, carrying a survival rate of less than 2%. Our world crumbled before us as we were told Zach had 4-6 weeks to live. To say we were devastated does not even begin to cover the despair we felt. How could this be happening? What do we do now?

Because of the severity of Zach’s case, there was no time to research, get second opinions, or even stop to think for a second. We learned the exact diagnosis and prognosis late in the afternoon on a Thursday. Friday morning at 8:00 am he was being fitted for his radiation mask for treatments which started later that day. Chemo started that evening.

Beyond the emotional trauma our new reality looked nothing like the one we knew before.

Keeping yourself organized, while seemingly insignificant to some, during a difficult medical journey is not as easy as it might seem. Most days, just keeping yourself emotionally okay and somewhat together is more than enough.  The list of daily (and often hourly) considerations and to-dos is long. There is so much critical information of which to keep track. Are the medications being taken at the correct time? Am I asking the doctors the right questions? How should I decide the best course of treatment?  It is important for your mental health to stay connected to your friends and family, but even that can be overwhelming. How do I keep everyone updated on progress without repeating the story 20+ times each day? How do I organize my friends to bring us dinner and help with other chores? How can I find other people going through similar situations? It was our family’s medical journey that led me to develop a product to help people stay organized and connected through their own medical journey.

During our own journey, my husband and I tried to remain as upbeat as possible, holding on to a glimmer of hope, for Zach’s sake and our own. As the weeks progressed and his symptoms lessened, we were encouraged to learn that the tumor had started to shrink. As excited as we were by this news, it was tempered by the knowledge that these tumors generally shrink with radiation treatment, but sooner or later they regrow and cannot be stopped. We tried to bury our anxiety and carry on as happily as possible. We were planning for his life and planning for his death simultaneously.

We were lucky that Zach’s tumor shrunk to 40% of its original size and his chemo seemed to be holding it at bay. Zach finished high school and only had to deal with mild side effects. The honeymoon ended 15 months after diagnosis when the tumor started to regrow and he was ejected from his clinical trial. After four anxious weeks, a new clinical trial was able to enroll him and he started treatment again. Sadly, this treatment caused swelling in his brain, which dictated the long-term use of a powerful steroid that caused a build up of fatty tissue in his spinal column. With his spinal cord compressed, he soon became paralyzed, unable to move, swallow or speak. This paralysis led to a deep vein thrombosis, part of which broke of and traveled to his lungs, causing a pulmonary embolism. He died four weeks later.

After Zach’s death, I started a non-profit organization to help patients and families.  I created the ZaggoCare System®, a how-to guide with organizational tools to help patients and their caregivers take control of and better manage illness or injury. Topics covered in the 120 page ZaggoGuide include how to manage medications, improve communication with doctors, become your own best advocate, and developing a support system. 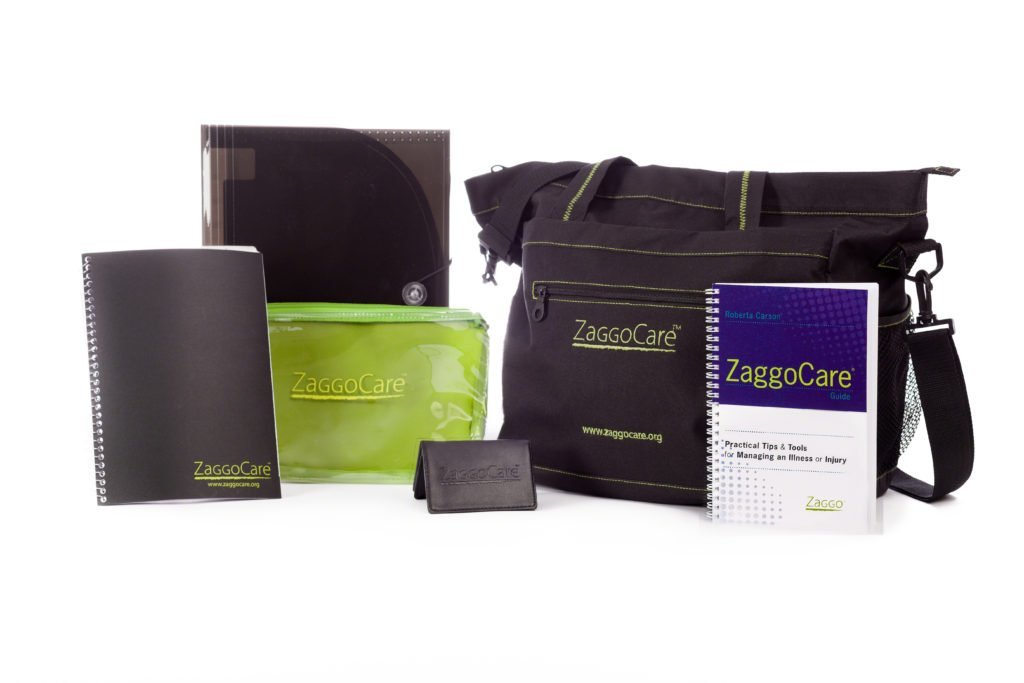 100% of profits from sales of ZaggoCare Systems are donated to Zach’s Fund for DIPG research.

Why is this so important?

The statistics are staggering. Preventable medical errors are the third leading cause of death in the United States. 40-80% of what patients hear in doctors’ offices is forgotten immediately — and even when information is remembered, almost 50% is remembered incorrectly. Without clear understanding of medical information, patients are more likely to skip medical tests, go to the ER more often, and have difficulty managing chronic illness. A recent report found that family caregivers feel unprepared for medical responsibilities, including medication management and coping with the lack of care coordination.

The ZaggoCare System provides guidance and tools needed for all patients and families to be engaged, empowered, effective members of their medical teams. Whether dealing with acute illness such as cancer, chronic illness such as diabetes, or serious injury such as traumatic brain injury, the ZaggoCare System can help you get the best care possible.

Written by Roberta Carson
Roberta Carson, Founder and President, Zaggo, Inc. Roberta founded Zaggo, Inc. in 2010 to help patients and caregivers effectively manage their own illnesses and injuries after caring for her son Zachary during his 27 month battle with terminal brain cancer. Roberta created the ZaggoCare System to provide patients and families with the information and tools they need to be engaged, empowered members of their medical teams. 100% of the profits from Zaggo are donated to the Zachary Carson Brain Tumor Fund to support pediatric brain tumor research.

This afternoon, I saw an off-Broadway play called Cost of Living, by Martyna Majok. It is a brilliant play that tells the stories of people who are...

She said she had something to tell me but that she was afraid. I reached for her trembling hand, telling her sweetly, naïvely, that it would be...

The Caregiver Space Facebook account has received numerous violation notices, accusing us of lying about where we're operating from, spreading...