Over the past few years I’ve written thousands of words on grief and loneliness. Sadly, I have to say, I’ve never came up with a solution, but instead, ways to cope.

There are things we can do to help ourselves out, if only for a few moments or hours at a time.

There are things we can do to help ourselves cope

In most of my articles on here and before, I said, or made it sound like grief and loneliness was always going to be a 24/7 nightmare. Now, looking back, almost six years later, I’m feeling better, and I can see where that was not quite accurate. But, when in the clutches of grief or loneliness, everything you do will be done in grief or loneliness.  However, sometimes in the moment, unknowingly at the time you, are feeling quite normal in that something you love to do is getting your attention. And for that short period of time, your life is in balance, healing is taking place.

There are normal moments, even in grief

So there were things that I did, that got my undivided attention.  Perhaps inadvertently, but does it really matter, I was creating sanity in an otherwise insane world.

Annie and I had a sincere love for antiques, collectables, vintage items, and just about anything we could buy and sell for a tidy profit.

In a sense, our love of the hunt for little hidden treasures, set me up in ways I didn’t understand at the time. Today, I can look around our home at some of our antiques and they once again create beautiful memories of the hunt, for me.  Sadly when Annie died, they became meaningless, until recently. So there is a light at the end of the tunnel, and you just have to keep pushing forward towards the light any way you can.

In a song that Sheryl Crow sang a few years ago, there were these lyrics. “If it makes you happy, then why the hell are you so sad.” And I think, what that says to me is, there’s times, opportunities, when we have to make a choice. Happy or sad. As you read on, you’ll see how I found a bit of happiness in the middle of a raging storm.

The addiction, the hunt 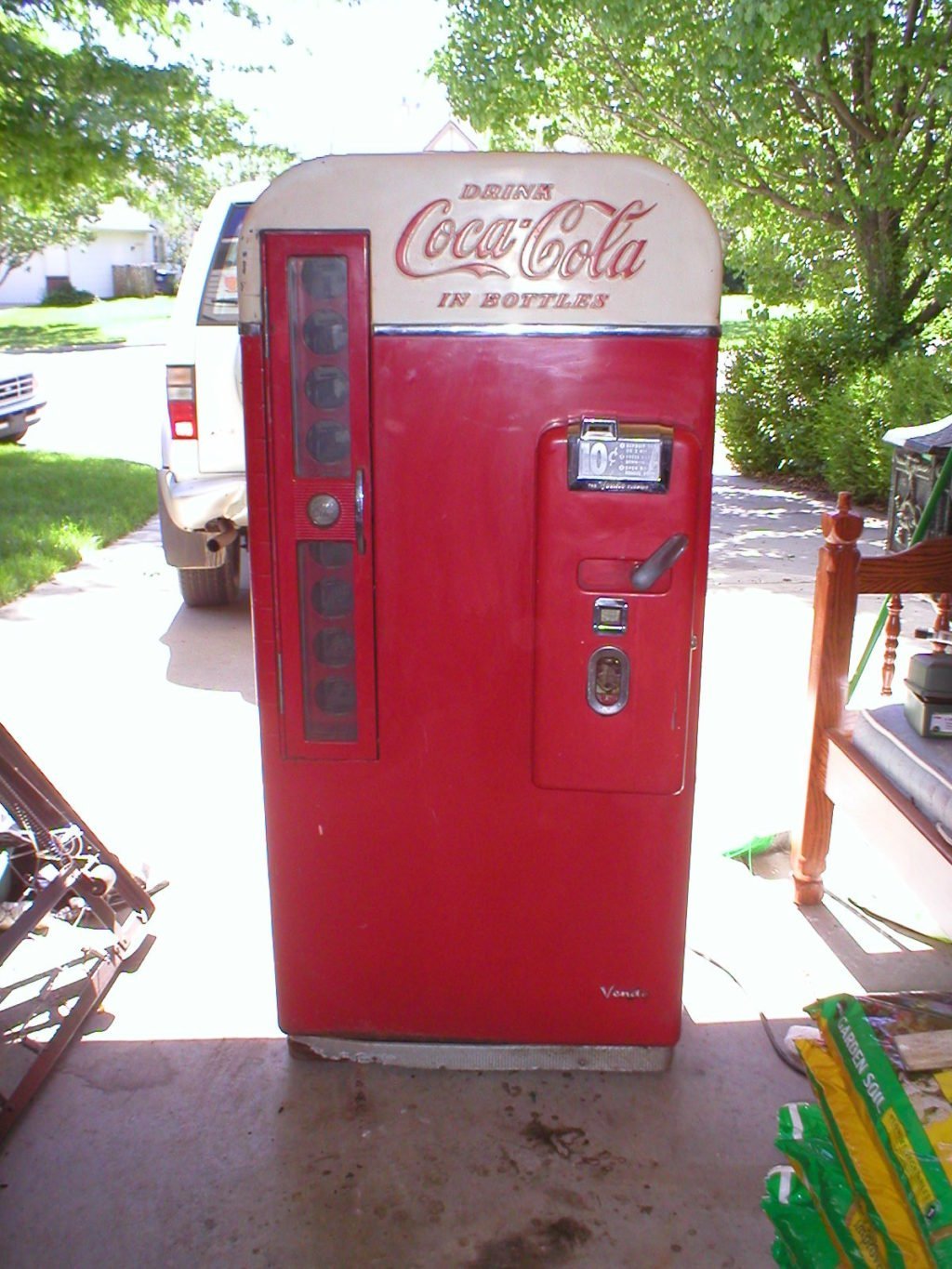 In October 2011, one month short of a year after Annie died, I was sitting in my dining room, anguishing over my loss, when the phone rang. It was an elderly Black man with a story to tell.

He had an old 1950’s Coke machine he wanted to sell. At that moment my addiction for the hunt kicked in. He told me where he lived, in an area I knew well,  the “Ghetto.” Despite warnings from two of my Black friends of many years, to stay out of the Ghetto, luckily I never listened. If one is addicted to the hunt, you go where it takes you.

We made arrangements to meet, and when I arrived on his door step, I met a tall elderly gentleman with a wrinkled face, from life’s wear and tear. We exchanged acknowledgements trough a firm handshake.

He walked me around to the back alley, and when he open the garage door, sitting right beside the door was a very desirable 1950’s Round Top Coke machine.

Of course I wanted to know the story behind the machine, but, he brushed my question aside. Instead, he told me a story about how his son got sent to prison for robbery and was serving a lengthy prison sentence. Through his choked up words, it was obvious that he was grieving the loss of his imprisoned son. He said he been talking to his son on the phone and he wanted him to sell the Coke machine, and send him the money for the prison commissary.

I purchased the machine and we loaded it into my truck. I then asked him if I could do anything for him. He said he’d be grateful if I’d take him to the local shop and by him a couple packs of cigarettes.  We made a short drive to a small old convenience store and I purchased him two packs of Newport Menthol cigarettes. Then I drove him back home and we said our goodbye’s. He was a good man, but getting old and tired, seemingly, down on his luck a bit.

When I got it home, my little treasure needed a lot of tinkering to get it running. It made me smile when I pulled the electric cord out of the back of the machine and soon noticed the male plug-in for the wall, was cut off. You see, back in the 50’s/60’s the machines always set outside in front of the old stores. It was typical for someone stealing a machine, to back up to the machine, quickly cut the cord, then push the machine into the back of a truck for a quick getaway.  The machines were usually sold or put in garages to be used for keeping beer cold. The one I purchased was probably never hooked back up, as the cord was original and worn from age.

And here’s where it helps to keep one’s mind occupied. While I was buying or tinkering with the machine, I wasn’t thinking of my loss. It was like a break from a nightmare. I even spent time wondering, and visualizing the garage setting where I found the machine, and what the activity must have been like in the garage. It must have been fun, as the Coke bottle opener on the machine had a large slot with a container to catch Coke bottle caps. It was full of various brands of beer bottle caps.

I tinkered on the machine, on and off for a month or so, until I got tired of messing with it. Too much work. Then decided that when I sold it, I would sell it, as is. From that point on I saw it every day when I went into the garage, but didn’t touch it for at least five months. It just set in place.

My grief was still very strong, but again, unknowingly I was finding ways to break the cycle.

About five months after I got the machine, I decided to sell it on EBAY.

After I sold the machine, I was contacted by the buyer, via email through EBAY. The machines new home would be a small retro restaurant in the Czech Republic. He told me a representative from a Russian shipping company would be contacting me, and make arrangements to come pick it up.

When the Russian arrived in my driveway a few weeks later, believe it or not, he wanted to talk politics. Our election of 2012 was just around the corner. He was now a resident of America, as a few years earlier he managed to get his family out of Russia and to New Jersey. He said he loved living in a free country.

For me, I just wanted to know what he was doing with all those beautiful Antiques in the back of his big white van. Well, they were going to the same man. The Russian explained to me, that in the 50’s and somewhat the 60’s, anything  good, classic or desirable was made in America. And his client was buying as much vintage and retro Americana as he could. The Coke machine represented a classic piece of American History, and the gentleman was buying the best there is and ever will be. Smart man. The value of those old classic round top Coke machines will only increase.

Selling the Coke machine motivated me to start selling some items in my home that were non sentimental. It kept me busy, I was making money, and while doing my thing, I was not being dragged down by grief or loneliness every minute of the day.

My hope is that this little story kept your mind occupied a bit and off what’s troubling you. Also, gave you some ideas on things that you can do to keep your mind busy and not stuck in the darkness.

We have the choice of grief and loneliness

I do believe we all have a choice with grief and loneliness. We may spend ninety-five  percent of our time in misery, but imagine the possibilities or opportunities we could have if we used the other five percent, doing things that were healing.

Remember, I’m looking back, and not suffering as I did for the first four plus years, and I can see clearly, I wasn’t suffering all the time, and you shouldn’t either. If you don’t have a hobby, perhaps you can find one. Or go to a support group, where you might find yourself trying to help people that may not be worse off than you, but in many cases, you’ll think they are. And helping each other can be healing as well.

Try to stay focused on the light.

I wish you all, the best.

Written by Bob Harrison
Bob Harrison was raised in the heart of the Redwoods in the far northwest comer of northern California. The little town of Crescent City, California was located near some of the world’s tallest trees, with the west shoreline being the Pacific Ocean. Bob spent most of his time fishing the two local rivers where some of the finest Steelhead and Salmon fishing is located. He was also well known up and down the north coast as an avid motorcycle racer, winning several hundred trophies, and one Oregon State title. Bob graduated from Del Norte High School with the class of 1966, then spent a one year stint at the College of the Redwoods, before having a strong sense of patriotism and joining the United States Air Force. After three years of service, Bob met Annie, the love of his life, and they got married in England in 1972. Bob’s love of country pushed him on to what turned out to be a very successful career, retiring in 1991. Bob’s last military assignment was Wichita, Kansas, a place he and Annie decided to call home. Together they developed and ran two very successful antique businesses until the stranger knocked on their door and changed their lives forever; “Because of Annie.”

The doctor told Ann that John had severely damaged his spinal cord and was paralyzed from his neck down. He was able to swivel his head from side to...