The metaphor: A portrait of a gatekeeper of love
Baby Boom Generation | Because of Annie | Caregiver Stories | Caring for a Romantic Partner | Long Term Caregiving

Annie lived and died in laughter. She was such a bright light for others fighting cancer, and struggling just to get through another day. She brought to them an un-feathered love, full of joy and inspiration.

She was the gatekeeper of love for many people she saw pass through the gate to the other side. She loved them all, and came to know many of them personally. That was a burden she had to carry and she carried it well.

One afternoon, not long into her illness, we were at the lab in the cancer center. Annie was in her wheelchair and I, by her side. I was looking down the hallway behind Annie, and saw this tall, sandy blonde haired, very well dressed gentleman that I recognized as a youngish doctor from Dallas, Texas, coming our way. He put his finger up to his lips, letting me know not to say anything. I didn’t, as seeing the look on his face told me why he was there. He walked up behind Annie, gently put his arms around her from behind, and as she slowly turned her head to look over her right shoulder, his face came into focus, their eyes connected with these softly spoken words, “My Mom died yesterday.”

Annie let out an audible choked up noise, and started weeping. He held onto her for a bit, knowing how much Annie loved and cared for his mom. It appeared, for that moment in time, Annie was still alive and perhaps a reflection of his mom, which created a method of keeping him emotionally connected while she opened the gatekeepers gate of love and let “Mom” through to the other side.

Then there was Tracey, a youthful 53 year old beautiful lady with so much life to live, now sick and caught up in the ugly, unforgiving world of cancer. When Annie and her met, she was also fighting a blood cancer, one that I knew she wasn’t going to survive…It simply was not responding to treatment.

What a blast, Annie and Tracey had when they were together at the cancer center…So full of fun and laughter. Tracey had a red vintage convertible, that was not getting much use due to her cancer. But in their free spirited imaginations, Tracey and Annie were traveling across the country, sometimes they’d go to Mexico and do some silly and  naughty things. Sort of like the movie from 1991, Thelma and Louise.  And you know what, I was never included in their journeys, and I didn’t even care. When they locked themselves into a world where there was no cancer, they didn’t need a chaperone. They just needed to live the only way they could, in a pretend world, “where dreams do come true.”

Several months into her journey, Annie was at the center getting her blood drawn by nurse Romie. A very large, young, African American Lady that could light up your world with her smile and deep laughter.  Her and Annie were like two peas in a pod. Sadly, when Annie asked her if she’d seen Tracey lately, the silence, became chaos. With a pause, Romie spoke words she’d rather not have had to say to Annie. Sorry Annie, Tracey passed away a few days ago. That was another challenging and sad moment for Annie.

But there were no tears, as Annie had met death head on, on several occasions over the first few months of her journey with her own illness. She knew what to do, the only thing she could do…Open the gatekeepers gate of love, for her dear friend Tracy to pass through.

Some folks say everything happens for a reason and some say, that’s not true. Whatever the truth is, Annie had an uncanny ability to connect with other patients at the cancer center, and it sure seemed like she was there for a reason, beyond cancer…Helping and inspiring others through their own personal journey, cannot be understated.

One would think, with a prognosis of only 3 to 4 weeks, that would have stopped Annie in her tracks. Not so! She reached out to every person she could connect with in the center. Always caringly loving them with her gentle smile and kind ways.

She’d say to me, “I want to help those less fortunate than me.” I did try to reconcile those words, but it was difficult. I once said to her in a soft voice, “Annie, how can anyone be less fortunate than you.” Somehow, Annie knew, she was going to see many folks that she cared for, die before her. And she did.

In Annie’s 5th month of fighting cancer, she was over 4 months past what science said would be her expiration date. Many of those patients knew that, and seeing her gracefully plow through each day, inspired them. She gave them hope for another day. It wasn’t uncommon to walk into the cancer center and overhearing nurse Jenny, speaking to a patient about “their little miracle girl.” Here’s the deal…Annie didn’t inspire people by living, she inspired people by continually beating the odds, cheating death, and not dying. The patients in the cancer center were already living, and I think seeing Annie, beaten and battered at times, inspired them to keep going.

Annie inspired others by continually beating the odds

Annie took me on an amazing journey, one of discovery of oneself. Always loving and teaching me things from her perspective…Things I couldn’t possibly know, or without her, understand. She was speaking, not just for herself, but all cancer patients and others fighting a terminal illness. She taught me the meaning of love, very deep, unselfish, and forgiving — to hope, when there was no hope, and to laugh in the face of adversity.

Annie was a proud lady, in a nice way, and not about to let cancer beat her down, body, mind, and soul. So she used the only weapons she had to fight with, ones she mastered as a child, “her ability to live, laugh, and love,” sometimes against all odds.

Annie has been gone for 5 years now, and I can say this without prejudice, she was a rare person, in rare form, bringing hope, laughter, and love to the lives of those fortunate enough to have been touched by her.

I noticed something during Annie’s thirty month journey with cancer — over a hundred days on the cancer ward in the hospital, and all the visits to the cancer center. Everyone seems to be living in the moment, a moment where strong friendships are forged, and only broken when a life is snuffed out.

Cancer teaches you to live in the moment

I honestly believe, some of the friendships would have lasted and flourished forever if, allowed to do so. And quite possibly, Tracy would have stolen Annie from time to time, and they’d be wearing the tires off the vintage red convertible as they trekked across the country, just like, “Thelma and Louise. 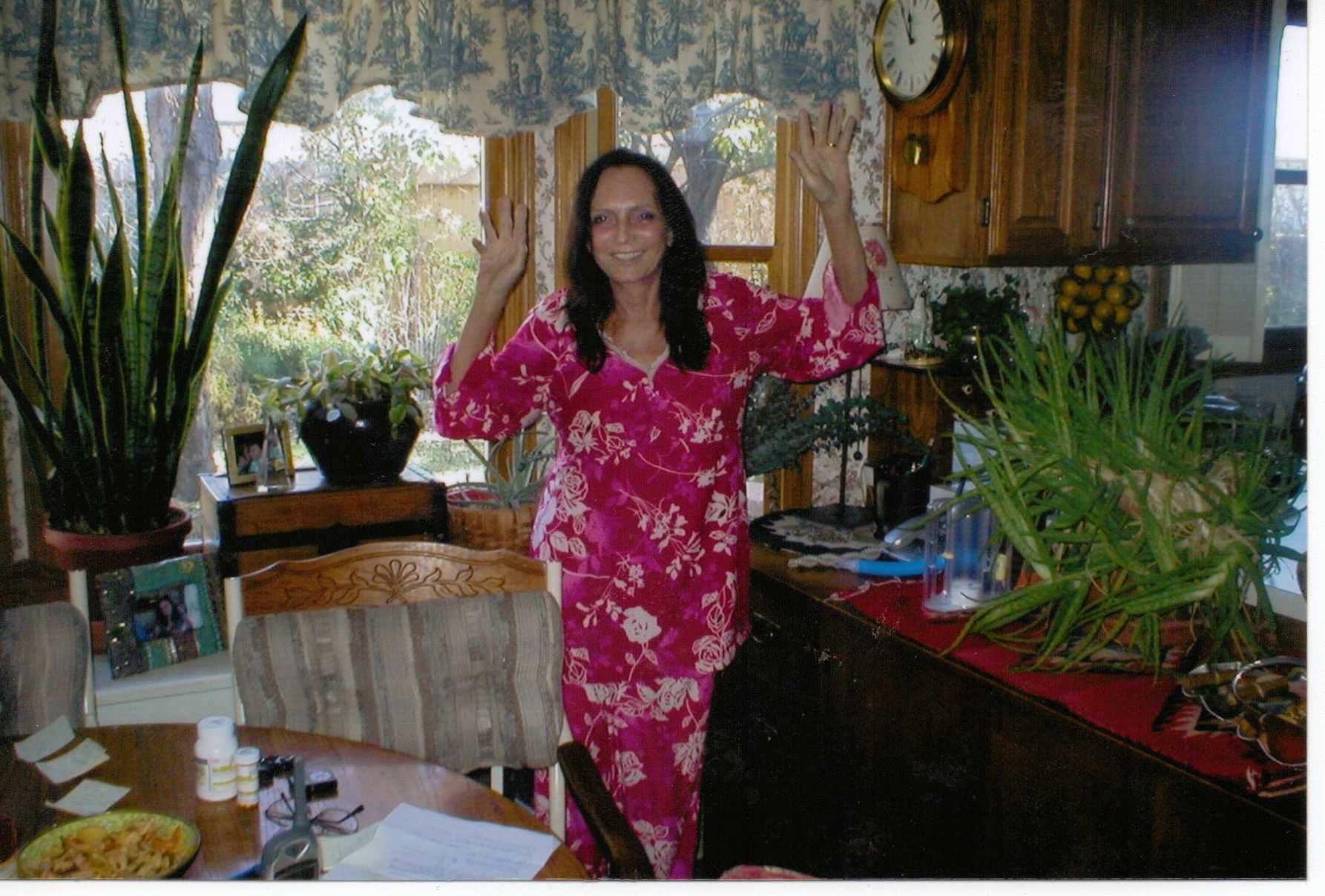 I noted in this article that Annie was given a 3 to 4 week prognosis. The third week post prognosis, both Annie’s femurs broke, her right hip joint broke off, and her spine collapsed. She had tumors up and down her spine and many in her hips. Cancer lesions were peppered over her skull. That was consistent with end stage multiple myeloma. The doctors had a grim outlook for her, but, told me if they could get her through high risk surgery mending the broken bones and the chemo started killing the cancer, there was a chance she would live a bit longer. Try to imagine that scenario.

The picture was taken less than 4 weeks after her bones broke on 16 July 08. I know that because Annie was once again admitted to the hospital, cancer ward, 15 Aug 08, in a coma. Again, the odds were stacked against her, and her narrow escape became a testament to her tenacious fighting spirit and will to live. Putting meaning to the term “Their little miracle girl.”

In the picture, she’d just held onto the round oak table and completed the circle around it.  She was showing off a bit by raising her right leg slightly. She had to be careful as her right hip joint and femur were wired in place to the hip.  Her bones were too badly diseased from cancer for a proper repair or hip replacement.

I’m sure it’s easy to see why she was so inspirational to others in the world of cancer, but she was so much more than that. She was a beautiful person, that meant the world to an unsuspecting stranger on the street, or the little old lady sitting in the corner in a winged back chair crying, because she was being placed in a nursing home. Annie shed tears for her, for others, and sometimes for the world.

I wish you all, the best. “Because of Annie“

Written by Bob Harrison
Bob Harrison was raised in the heart of the Redwoods in the far northwest comer of northern California. The little town of Crescent City, California was located near some of the world’s tallest trees, with the west shoreline being the Pacific Ocean. Bob spent most of his time fishing the two local rivers where some of the finest Steelhead and Salmon fishing is located. He was also well known up and down the north coast as an avid motorcycle racer, winning several hundred trophies, and one Oregon State title. Bob graduated from Del Norte High School with the class of 1966, then spent a one year stint at the College of the Redwoods, before having a strong sense of patriotism and joining the United States Air Force. After three years of service, Bob met Annie, the love of his life, and they got married in England in 1972. Bob’s love of country pushed him on to what turned out to be a very successful career, retiring in 1991. Bob’s last military assignment was Wichita, Kansas, a place he and Annie decided to call home. Together they developed and ran two very successful antique businesses until the stranger knocked on their door and changed their lives forever; “Because of Annie.”

The doctor told Ann that John had severely damaged his spinal cord and was paralyzed from his neck down. He was able to swivel his head from side to...

Be heard
Go to mobile version